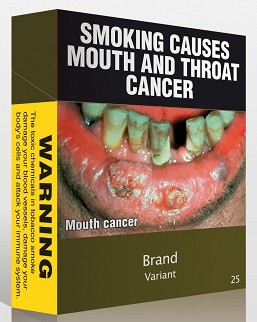 From 2010 onwards, the Australian ministry of health wants to reduce smokers' appetite for cigarettes noticeably. Australia would be the first country in the world to force cigarette companies to sell cigarette packages featuring close-up photos of mouth and larynx cancer. In addition, producers would also have torefrain from printing brand names and image brands. The producer's name would just go hardly perceivable besides the health warnings.

A speaker of the Australian tobacco industry criticised the so-called "plain packaing", because that way consumers would have no opportunity to identify themselves with a brand. The message the ministry announced was: "Exactly, that is our intention."